Widely known and practiced all around the globe, the art of Yoga is accepted as a way of life by many people. In the modern world, the importance of  Power Yoga is plentiful as has taken its place as a fitness lifestyle for many. Especially for people leading busy lives, Yoga has helped maintain their physical and mental health and lead more fulfilling lives.

What is Power Yoga? 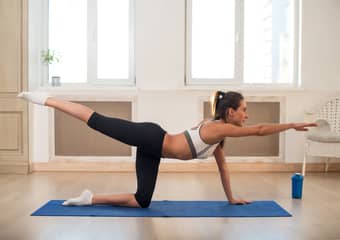 As self-explanatory as the name is, Power Yoga is a more athletic version of the old Vinyasa-Style Yoga involving robust fitness-oriented methods that synchronize breath with movements.

Power Yoga is a hybrid of the dynamics of Ashtanga Yoga, with its several vinyasas, and the energy and flexibility that flow as smoothly as melted butter on a toast. It provides a quick and effective work out favored by fitness-lovers all around the world.

The invention of Power Yoga happened in the United States of America in the 1990s when two yoga teachers worked to make Ashtanga Yoga, famous for being a type of Yoga filled with rigorous poses, easier for the people who were trying to learn it. From there, it gained popularity all over the country and, subsequently, became known and accepted all-around the world.

Difference between Yoga and Power Yoga

Traditional Yoga is a group of physical, mental, and spiritual disciplines which originated in ancient India. It is more of a mild physical activity that is open to all people irrespective of their medical conditions and any individual could practice them on their own without any supervision. On the other hand, Power Yoga is not for people with certain medical conditions and needs a supervisor. For instance, a doctor can recommend Yoga to a pregnant woman, but not Power Yoga because it can prove difficult for her and the baby and is more beneficial as an afterbirth fitness routine.

Traditional Yoga is moderate and slow in comparison to Power Yoga which is widely renowned for its signature aspect of vigorous speed. The point of focus in Yoga is the position of the body whereas in Power Yoga it is the body movements and transitions between them that matter.

Yoga plays a vital role in ensuring that the body and mind continue to be fresh. Yoga focuses on the mental and physical fitness of an individual. It is primarily concerned with rapid body movements which help in improving the cardiovascular output, physical fitness, and firmness.

Power Yoga, when performed routinely and correctly, does wonders for your body and mind. It promotes stability, posture, tone, and balance in the human body.

A lot of people claim that no matter how exhausted they might be, even ten minutes of Power Yoga expels their tiredness and replaces it with rejuvenated strength and energy. Well, this is not a baseless claim. There has been scientific proof that Power Yoga restores stamina and energy and increases the flexibility of the body.

A lot of athletes and sportsmen, like cricketers, tennis players, boxers, wrestlers, dancers, etc., include Power Yoga in their fitness regime because it helps them stay fit and energetic tournaments for their sport.

Power Yoga is a widely known fitness routine for helping morbidly obese people lose weight as most doctors, gym-trainers, & dieticians recommend it. It has been adopted by many people,  especially women, in their daily lives to stay fit. People wake up in the morning and perform Power Yoga and go about their business – this helps them maintain their shape even if they have busy lives.

The immune system is extremely vital for the functioning of the body. It fights off various viruses and infections to keep the body healthy. Power Yoga is a natural immunity boosting fitness regime builder which has shown results where various medicines like antibiotics have failed.

The body needs the blood to reach all the organs for it to execute the required bodily functions well. It encourages blood circulation, therefore, improving the overall health of a person. Twisting, bending, inverting, and doing core exercises not only pump oxygen in your body but also lowers your chances of getting a heart attack, stroke, etc.

Backed up by extensive scientific and psychological research, Power Yoga helps cure depression and anxiety. It reduces levels of the stress hormone, cortisol, in the body which eases physiological responses like dropping blood pressure, decreasing the heart rate, and making it easier to breathe. For people who have highly-stressful jobs, practicing Power Yoga makes them less vulnerable to tension, depression, and anxiety.

Power Yoga is good for bone health. The weight-bearing poses in it improve bone density and structure. The benefits range from improved posture to increase in endurability and flexibility.

Power Yoga is a must-have fitness routine for women new to motherhood during postnatal times. Not only does it help the mother lose weight, but it also helps to restore her core strength after childbirth. After the birth of the child, it helps the mother regain her strength and fitness with impressive strengthening effects on the belly, hips, and pelvic floor.

Also, it can chase away the afterbirth blues which most women suffer from due to Postpartum Depression

Power Yoga is extremely effective in correcting posture because most poses require you to bend your body, move it back and forth, etc. This is beneficial for the spine and increases flexibility.

Power Yoga also has a great effect on the human mind. Routine practices of Power Yoga can be useful in developing one’s memory, reaction time, and coordination.

Through Power Yoga, the human body gets rid of adulterations like lactic acid, carbon dioxide, lymphatic fluid. These get out in the form of sweat which is secreted because the body got heated due to physical activity.

Power Yoga is an extreme form of Yoga. An individual would sweat profusely while doing it. It is famous for being stimulating, pumping, and soothing – all at the same time.

Here are some poses which one can try if he does not suffer from any medical conditions. Keep in mind that these poses must be done fast and energetically.

Utkatasana or the chair pose is an asana where you appear to be sitting on an imaginary chair, but it is not as easy as sitting on an actual chair. This asana should be practiced in the morning on an empty stomach. You should hold that position for 30 seconds to 60 seconds.

Utkatasana increases your stamina and tones your knee muscles. It strengthens your ankles, calves, and hips. The pose expands your chest and stimulates your heart.

The Locust pose is a backbend position that looks like a grasshopper. Practice it in the morning on an empty stomach or evening after a gap of 4 to 6 hours from your last meal. Salabhasana is a beginner level yoga asana. It’s meant to be held for a minute or so.

Salabhasana strengthens the muscles of your upper and lower back. The pose relieves anxiety and calms your brain. It strengthens your arms and improves the resistance of your body.

Plank Pose or Chaturanga Dandasana is an asana with symbolism similar to a plank. Chaturanga means four-limbed, as the asana needs the support of your four limbs. It should be practiced in the morning on an empty stomach and held for a minute or so. It is a beginner level Vinyasa yoga asana.

Chaturanga Dandasana enhances your core balance. It refreshes your mind and body. The pose builds your stamina by strengthening your arms, legs, and wrists.

Adho Mukha Svanasana or the Downward Facing Dog is an asana well known in the fitness world and pops up in many pop culture references. This stance matches the pose of a dog when it bends forward. It should be practiced in the morning on an empty stomach and with clean bowels. It is a beginner level Ashtanga yoga asana. The practitioner has to stay in a position for 1 to 3 minutes.

Adho Mukha Svanasana strengthens and rejuvenates the body. It expands your lung capacity and eases mild depression. The pose strengthens your bones and counteracts osteoporosis.

How to Become an Accountant? Their Salary, Jobs, courses UK